Too sick for a GP, but not ‘sick enough for hospital’ 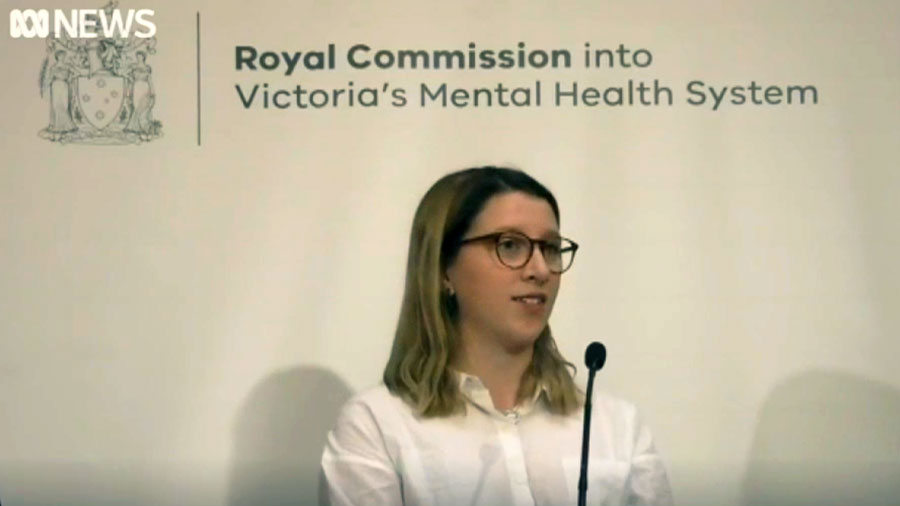 Georgia Harraway-Jones spent months “in limbo” as one of about 300,000 Victorians falling through the gaps in the mental health system.

The 20-year-old was diagnosed with an eating disorder, depression and anxiety in July 2017.

Ms Harraway-Jones missed out on care because her illness was too serious for a GP, but not serious enough for hospital admission, she told the Royal Commission into Victoria’s Mental Health System on Wednesday.

She said she was forced to wait months to access community mental health services, including a three-month wait to see a psychologist.

“It was really isolating. I was stuck in this limbo, where I was too sick for places such as Headspace,” she told the hearing.

“But I wasn’t sick enough for the hospital. I was just stuck in this period between supports.”

Ms Harraway-Jones said her mental health deteriorated as she waited.

“In that time I feel like my eating disorder really tightened its grip around my throat. I lost a lot of weight to the point I was threatened with involuntary admission,” she said.

Eventually Ms Harraway-Jones did require hospitalisation, but after being advised it would be a three-month wait for a public bed she used her parents’ health insurance to access help through the private health sector.

“At that time, I was quite suicidal, I had a plan and all of that. I really wasn’t eating,” she told the commission.

“I don’t think I would have made it those three months if I had waited.”

Her evidence comes a day after the Victorian Government released its submission to the commission, in which it admitted major gaps in the availability of services.

The commission on Wednesday heard from experts who said the community mental health care services were suffering from insecure and inadequate funding, a lack of planning for population growth, and fragmentation.

“The whole model of community care breaks down, I guess, to be frank,” Associate Professor Stevenson said.

Associate Professor Stevenson said while the community mental health model worked well 15 years ago, funding cuts and a lack of planning for population growth had led to an “erosion” of services.

“As the funding became tighter and demand grew, we were no longer able to meet the demand,” he said.

“We’d probably have to see at least a doubling of funding to community teams to adequately provide services to those who need it the most.”

The commission heard about one community-based program aimed at helping people who require support, but who had not hit crisis point.

Designed as small home-like units for stays of up to 28 days, the Prevention and Recovery Care (PARC) centre model is one alternative to hospitalisation.

“It’s a very much holistic view — how do you keep yourself well, given the stressful environment that you’re living in,” she told the commission.

Ms Amman said after a stay in a PARC centre a mental health plan would be drawn up and a client would have the option of returning in case of a relapse.

“What we have found is those individuals have not had a hospital admission since PARC has become their preventive plan,” she said.

The royal commission will continue exploring access and navigation of the mental health system on Thursday.

It is due to deliver an interim report by November, with a final report due in October 2020.